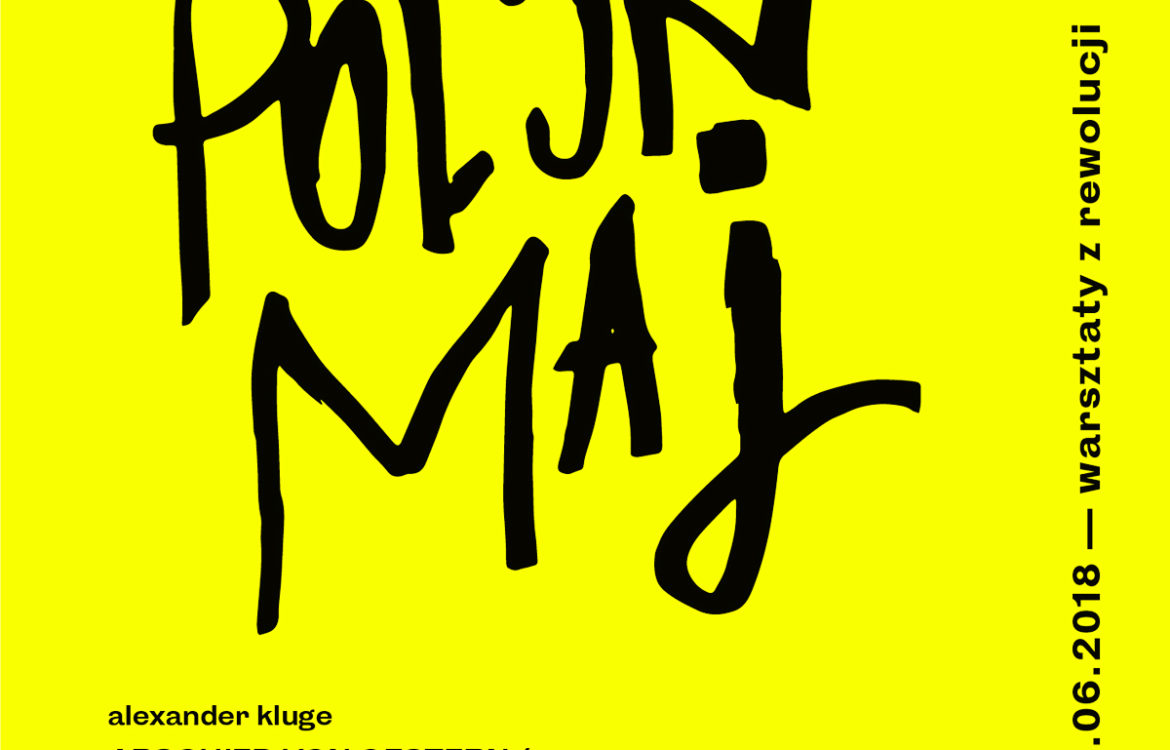 The Polish May exhibition is an attempt to breathe the spirit of a revolution into the Polish context. The May in the title is synonymous with moral re-evaluations. The title perversely evokes the Polish national context, although the exhibition presents films from Germany and Egypt, i.e. countries where revolutions, though with different long-term effects, have nevertheless taken place. The presentation at the Theater of the Eight Day is expressive of the idea that both May 1968 and other great, emancipatory social upheavals have actually bypassed Poland. There was, of course, the disgraceful March 1968 and students' protests opposing the anti-Semitic communist government, yet a full-fledged, real moral revolution has never occurred in our country. Now, on the 50th anniversary of May 1968, when city streets are venues of successive waves of Black Protests, the time has come for finally doing our homework from the past and joining the global, inter-sectional and inter-generic history of emancipation.

The exhibition at the Theater of the Eighth Day, by showing movies by the German director, writer and screenwriter Alexander Kluge: Abschied von gestern / Yesterday's Girl, the Triptychon visual collage as well as footage documenting the Arab Spring, selected by the Polish-Egyptian artist and activist Jasmina Metwaly, aims to show this transnational, emancipatory dynamics, not forgetting very specific, cultural references.

Abschied von gestern is the first full-length feature film by Alexander Kluge. Shot in 1966, it depicts perfectly well the alienation and dissatisfaction of the generations of young Germans who grew up in the post-war years. The film tells the story of Anita G., a young woman who having left East Germany cannot find a place for herself in the West world, either. Her herstory is a record of conflict with the patriarchal system of institutionalized authority, with a world she cannot possibly relate to. Uns trennt von gestern kein Abgrund, sondern die veränderte Lage / What separates us from yesterday is not a rift, but a changed position, - this quote from Reinhard Baumgart is the first frame of Kluge's film. It is only the events of the year 1968 that will bring hope of changing the old order to the young generation.

The Triptichon is a film collage compiling documentary footage of contemporary protests with archival drawings of past revolutions. The film starts with the words: Die Revolution ist ein Lebewesen voller Überraschung, i.e. The revolution is a living being full of surprises; we do not know the direction which revolutions take; sometimes they explode simultaneously in different nooks and corners of the world, as in 1968. Other times they are centuries apart. Here they meet in a six-minute movie, on a black, undefined background, side by side, regardless of their chronology and geography.

The installation and performace 6. lessons with Alaa by Jasmina Metwaly, a Polish-Arabian artist currently living in Berlin, is a combination of fragments of documentary footage of the Egyptian revolution (2011-13) against the authoritarian rule of Husni Mubarak. The footage was gathered by the Mosireen collective, of which Metvaly is a co-founder and participant, and is available online at: www.858.ma. The artist decided on selecting the fragments that usually escape the attention of foreign reporters. It is a revolution seen through the eyes of a single person, someone from the crowd, sometimes an artist, sometimes someone else, holding a camera in hand. By selecting, editing and assembling the raw footage gathered in the form of a virtual archive,

Metwaly draws conclusions earlier put forth by Alexander Kluge: a revolution is like a living being that cannot be controlled; both when participating in it and post factum we are unable to understand much of it other than the fact that something of major importance has happened. For this reason, it's best if we concentrate on the right position of the camera so that it does not shake. First, we must stand firmly on two legs, move slowly, do not make jerking motions with the camera, and do everything as Alai teaches us.